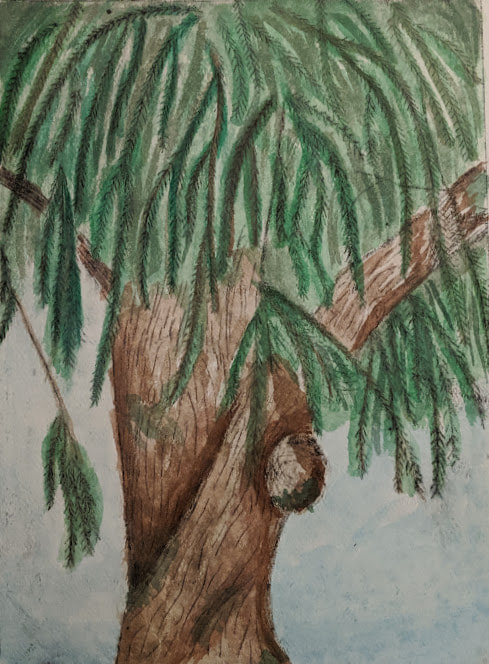 Hecate's Tree.
Dry Point Print
(Measurement)
October 2019
Exhibition Text
"Hecate's Tree" was inspired by the work of Ansel Adams and Roman Loranc and spirituality. This piece is based on a specific tree from my childhood and the meaning behind the tree. A Willow tree represents protection and is the tree of the Goddess Hecate. She is the Goddess of magick, the moon and the night. ​

Inspiration
Once again one of my main artists of inspiration is Ansel Adams. I have been in awe of his photography for years, his work is beautiful and so powerful. Anything with nature I automatically connect with, but his black and white photography is so much more powerful and has much more depth to it. Another artist is Roman Loranc, a polish photographer who has a similar style to Adams. I want the detailed image of nature and to have the same impact that their photography has. 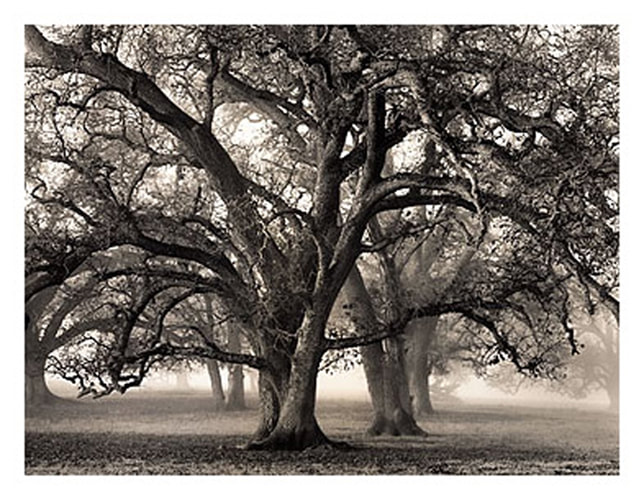 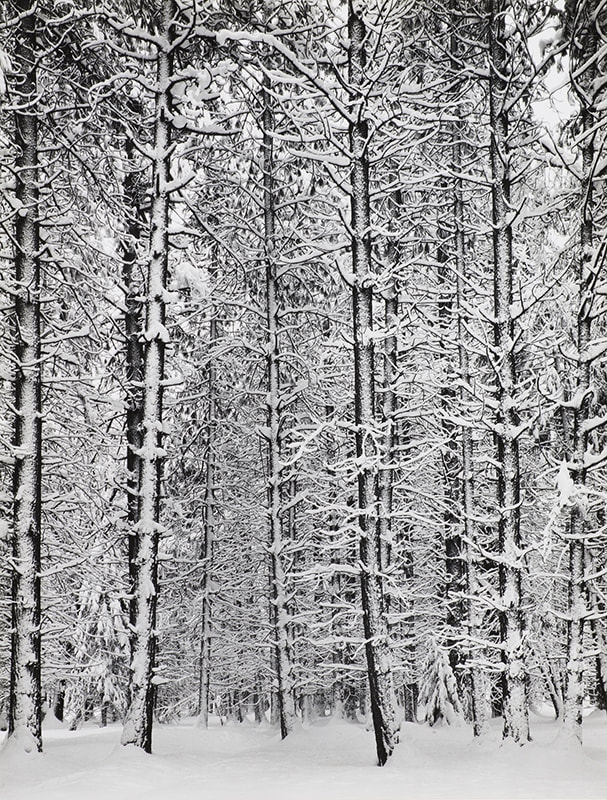 ​I immediately knew what I wanted to do when we were told about this project. Like I said above in my inspiration, there's a tree that I've always loved, and I knew I wanted to use a picture of it for my reference. All four of my sketches are different variations of the original photo. Some of the sketches are more complicated than the others, and some are just re drawings of a previous one. My first sketch is extremely complicated and I was spending way too much time on it. It was turning out really nice and would have been nice to do, but I knew it would have been way too much work with the time I had. My second sketch was way simpler and still the entire tree. I really liked this sketch, but comparing the sketch and the actual tree, it was way too smooth and round. With my third sketch I fixed this and made it much more angular, but it was still the whole tree. I had gotten the important parts onto this sketch, I looked at it and realized one, I spent way too much time again on this sketch, and it was far too complicated for my deadline. My fourth and final sketch was zoomed in and focused on the specific part of the tree I wanted to be emphasized. I made the knot in the lower part of the trunk of the tree the main focus of the piece. In the sketch I outlined the trunk, knots and the basic outline of the branches. This last sketch was my favorite and worked out the best for this project. 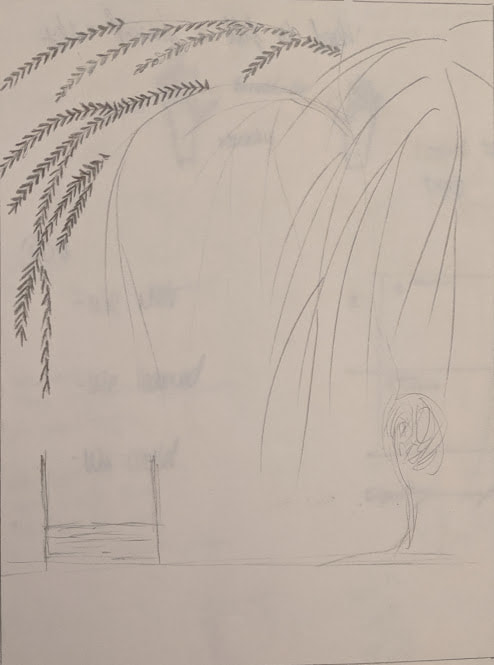 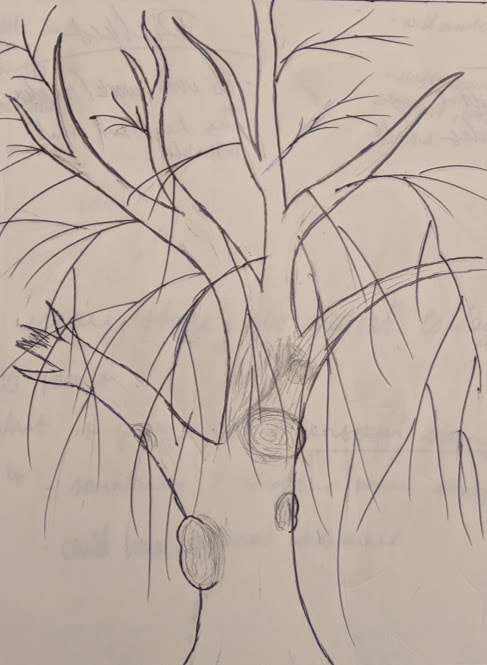 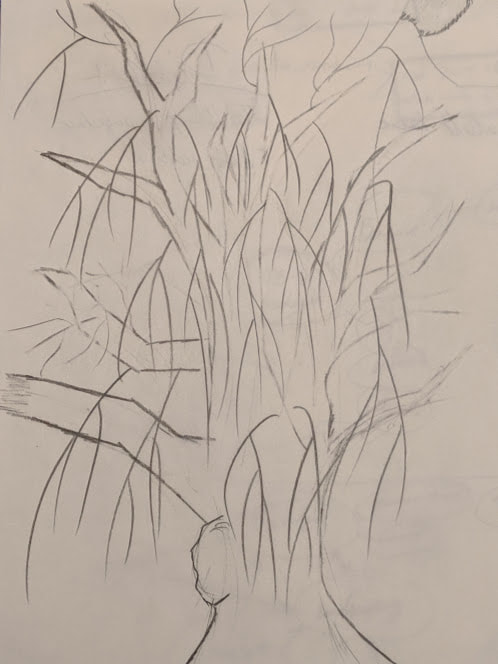 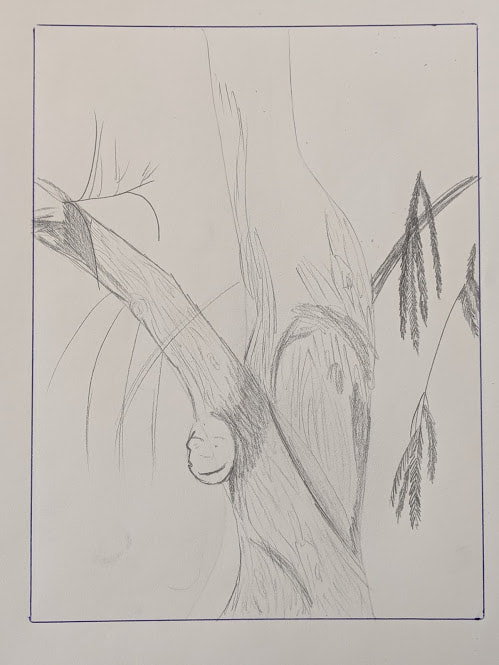 The only experimentation in the carving aspect of this project was deciding whether I wanted to crosshatch between the branches or not. I tested this in a lower section of the branches where I could easily mask it if I decided it wasn't good. Which I did decide that I didn't like it and I hid it with the detail of the bark. I thought this would have made the piece way too dark and would have made it too much work for me, and I knew I could create depth with water colors, which I did. I never actually took any pictures of this part. 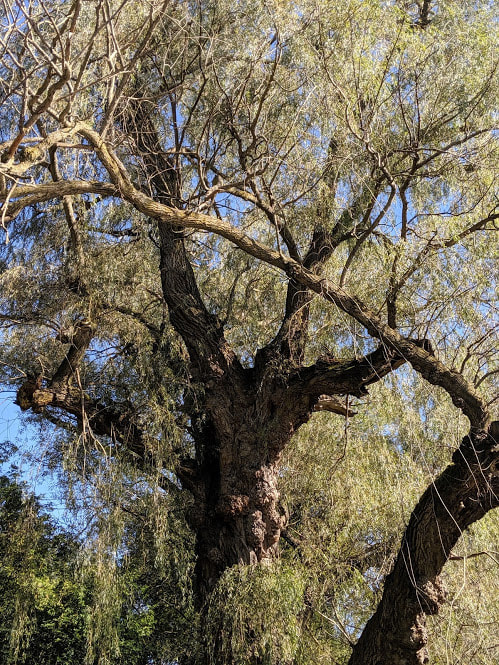 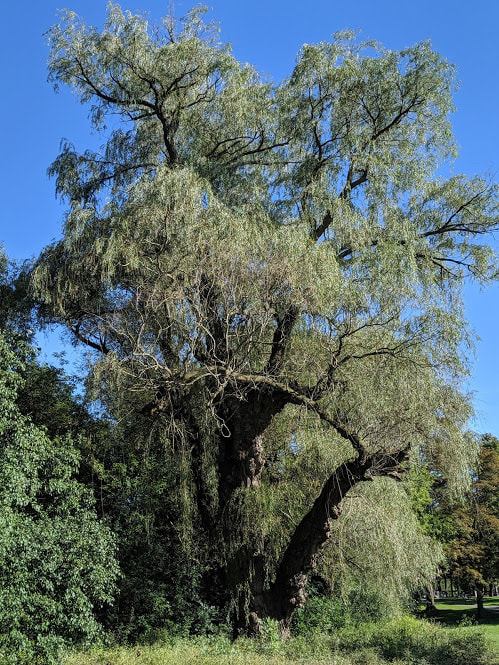 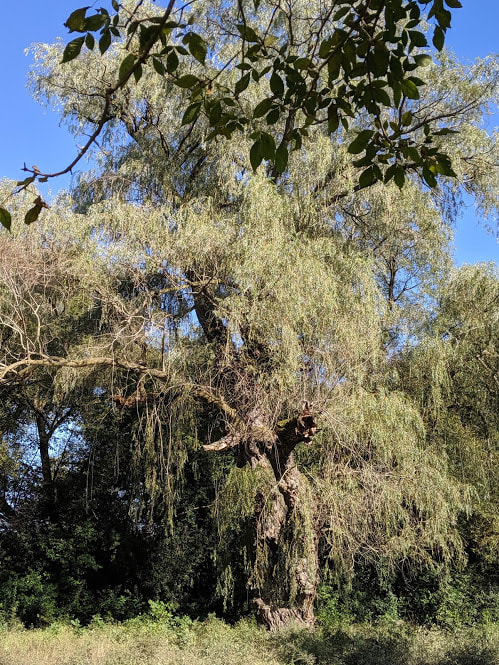 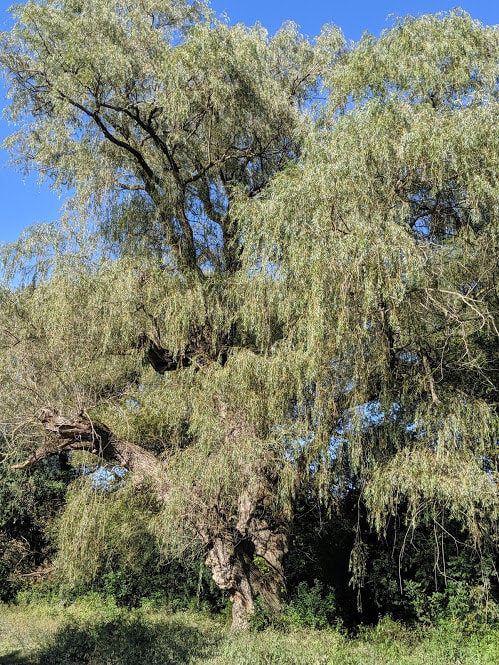 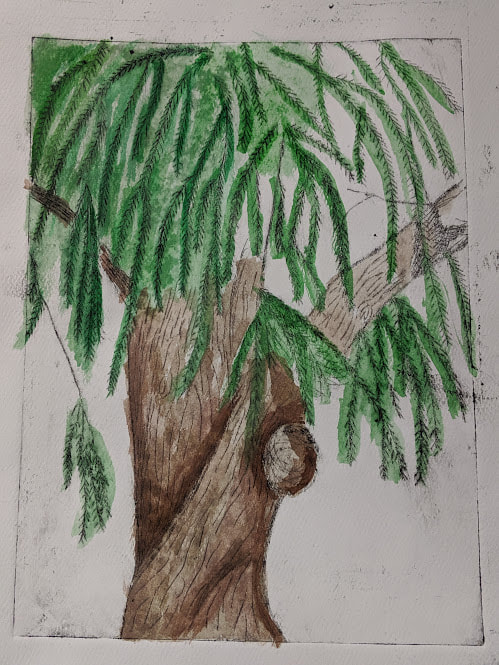 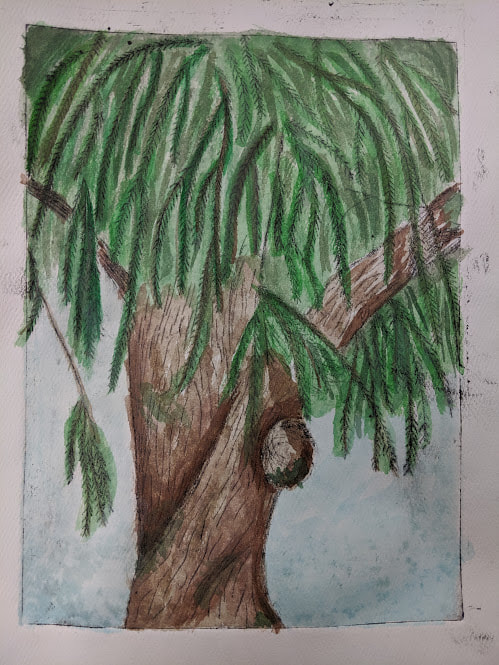 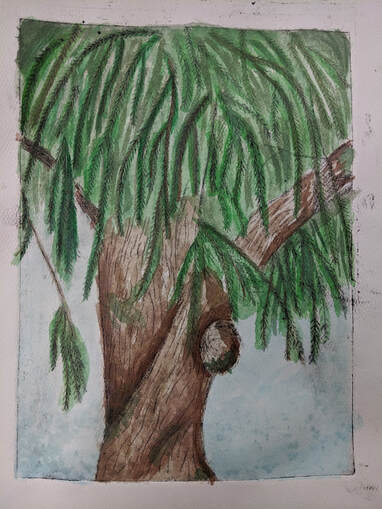 I think my work reflected my pieces of inspiration, yes, they are all trees, but the detail and delicateness of everything and the story they tell. Both pieces are in different places and seasons, and both artists thought it was important to get the images when they did because of the story behind them. Whether it was a personal story like mine or if they saw a specific special moment that needed to be captured. I think the fact that I added color is the biggest contrast between all of the works. I liked how it looked in black and white, but I felt like I needed the color to show how vibrant the tree is in summer, when I took my reference photos and when I normally see the tree. I think the inking process was a little rough, i like to work quickly and get things done, I'm not sure if I let the paper soak long enough or if I put enough ink on, but I did like how it turned out. I feel that the carving part of the process was the best part of the whole deal. I think if I would have relaxed and took more time on it it would have worked out a little better.

Clearly explain how you are able to identify the cause-effect relationships between your inspiration and its effect upon your artwork:
The details of the tree and the fact of the tree being the focus of the piece. My inspiration shows the beauty and importance of nature, plants and specifically trees, which is what I tried to convey through my work.

What is the overall approach (pov) the author (from research) has regarding the topic of your inspiration?
​Scott Cunningham, the author of the book I used in my research, talks a lot about the Goddesses and deities. He strives to educate readers on the different deities and their power, Hecate has always stood out to me and I've always connected with here.

What kind of generalizations and conclusions have you discovered about people, ideas, cultures, etc. while you researched your inspiration?
I said this in my previous project, but people are scared or people who practice witchcraft, or they glorify it making it some fantasy thing. I think witches just want to be recognized as a real group, not just old people with green faces you may see on your T.V. screen or at Halloween. Not that that's a horrible thing, it's honestly just something to laugh at now.

What was the central idea or theme around your inspirational research?
Ansel Adams, I think, wants to show the beauty in nature, and the light and dark aspects of it. He wants people to actually see the cliffs, mountains, trees and plants and see all the different parts of them.

What kind of inferences did you make while reading your research?
I inferred that photography helps to save and cherish specific moments, and a lot of Wicca is about focusing on the present and not worrying too much on the past or future.